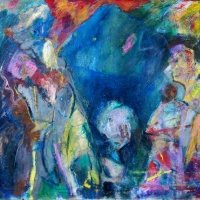 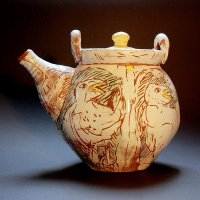 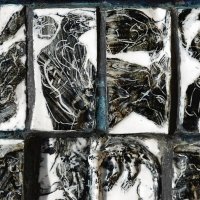 A bit about the artist

Peter Hiort Petersen was born in the Copenhagen region in the early winter of 1938. Born an architects son, he was encouraged to draw from a young age. At barely 16, he studies and apprenticed as a machine operator in Elsinore for four years before turning to the seas. For years he sailed through out Asia all the way to the Southern Americas before coming home again and going to university to become a mechanical engineer. It wasn't until he was in his early thirties that he decided to take his artistic talents more seriously. He started by studying drawing for four years at the Glyptotek's Art Academy in Copenhagen and then entered the Kunsthåndværkerskole majoring in ceramics. It was here he met his soon to be wife, Grethe Lauesen and in 1975 they emigrated to Canada. They moved to Sault Ste Marie, a small city in the heart of the Great Lakes area.

Both Grethe and Peter taught at the Sault College of Applied Arts and Technology for 12 years. Peter was the was dean of the Ceramics Faculty at the College and exhibited his work through out these years. In 1989 they moved to Ottawa where he continued to teach ceramics along with painting, sculpture and drawing. It was in these years to come, that both Grethe and Peter's artistic careers really began to blossom, receiving numerous prizes and exhibitions through out the country. Yet, Peter had a constant need to keep learning and trying new things out. He had always been interested in computers even before they became a household norm and was a self-taught computer programmer, teaching classes in between the art classes. But it wasn't until 1994 his logical way of thinking and years of computer programing came in handy . He was hired as a forensic artist at the legendary Royal Canadian Mounted Police, where he worked for eight years. His work included creating wax models based on craniums and producing identi-kits, and ageing the faces of missing children in the hopes of finding them.

In 2003, they moved back home to Denmark, to the little island of Bornholm. Here in the middle of the Baltic Sea, Grethe and Peter bought a house in Svaneke, a town on the Eastern corner of the island. Bornholm is famous for it's special magical light which has been attracting artists to it for centuries. Grethe and Peter have always had a love for the artist's island from their youth and quickly felt at home.

Peter Hiort Petersen is a multi-talented artist with the kind of mind that is forever wondering and pondering the world around us. From mathematics, physics and history to mechanical engineering, philosophy and craftsmanship, it is no wonder that Peter's artwork is in a world all of it's own. Ceramics and sculptures, paintings and drawing, his artwork always tells stories, and the more you allow yourself to be drawn in, the more of the story you will be told.